After weeks of planning, finally! Started the day very early. Left Manila at 3AM, gased up at Petron SSHwy and early breakfast for an hour.

Finally off a little past 4AM. Original plan of catching sunrise at Atimonan coastline was scrapped because we left Manila an hour late. By 5AM we were already in Sariaya with almost all vacationers on the road.

Passed the towns of Lucena, Pagbilao..stopped at Atimonan coastline for some photos..then Plaridel and Gumaca. By the time we reached Gumaca it was already 8am. So breakfast again (since our next stop will be Naga already for late lunch).

After breakfast, we started our Visita Iglesia---at Gumaca's Cathedral of San Diego de Alcala. A rustic, centuries old church with beautiful ceiling. "Its first establishment was in 1582, on its present site. It was transferred to Silangan in the island of Alabat in 1638. It was burned by the Dutch forces in 1665; reconstructed and beautified in 1846. It is known as the biggest and oldest Catholic Church in the province of Quezon. It is located in Brgy. San Diego Poblacion near the Municipal Government office (from wikipedia)".


By 10am, we were off to Naga...passed Lopez, Calauag...the arc welcoming one to Bicol...and here the very rough road begins up to Tagkawayan and some portions of Camarines Sur.

The whole Quirino Highway is under construction and some portions have damaged cemented roads...so extra caution is advised otherwise, you will end up "flying" or with a blown tire. If you plan to take this route, be ready with 1 peso coins to give to kids/adults dotting this road directing motorists since most roads are one way...and I mean there's a lot of them!

One more thing, gas up at Tagkawayan because that is the last decent gas station all the way to Naga.

After 374 kms, 8 hours of driving hours, rough roads and extreme heat, we reached Naga past 1pm. After check-in, we had our late lunch at Geewan - a fastfood restaurant at the city center serving authentic Bicol food at really affordable prices.

Then on to Visita Iglesia...Naga has several great churches but chose to visit 4 that were all within the city proper. San Francisco Church is a relativley newly renovated church at the City center...then on to the Penafrancia Shrine..then to the Penafrancia Basilica Minore where you get to kiss and touch Our Lady of Penafrancia... and lastly, the Naga Cathedral.

By the time we reached Naga Cathedral, it was already 5:30pm and a mass was on-going, so we decided to do our last stations at the Stations of the Cross within the church courtyard---beautifully made in stained glass... 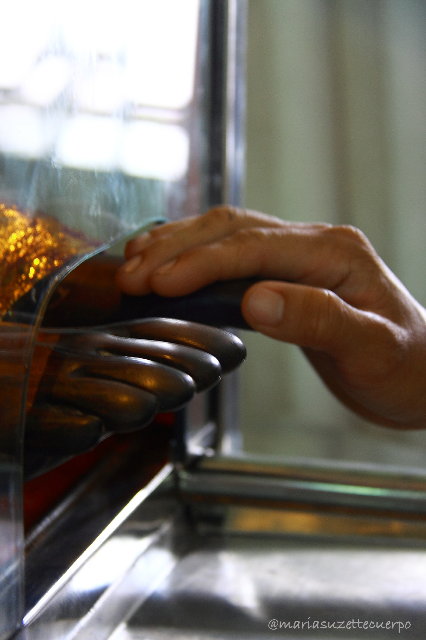 It was a long, long day for me...yet, I did not feel tired until we were back in the hotel, showered and refreshed....I enjoyed the road trip..taking in the beauty of the various towns we passed..discovering more places to go back to...

Discovered a local delicacy: Their local "puto" made of cassava flour with "bukayo" (sweetened young coconut) filling, steamed via a makeshift used can of cooking oil.  It's yummy, not too sweet, and it's cheap. You can find locals selling/cooking these just outside the San Francisco Church.